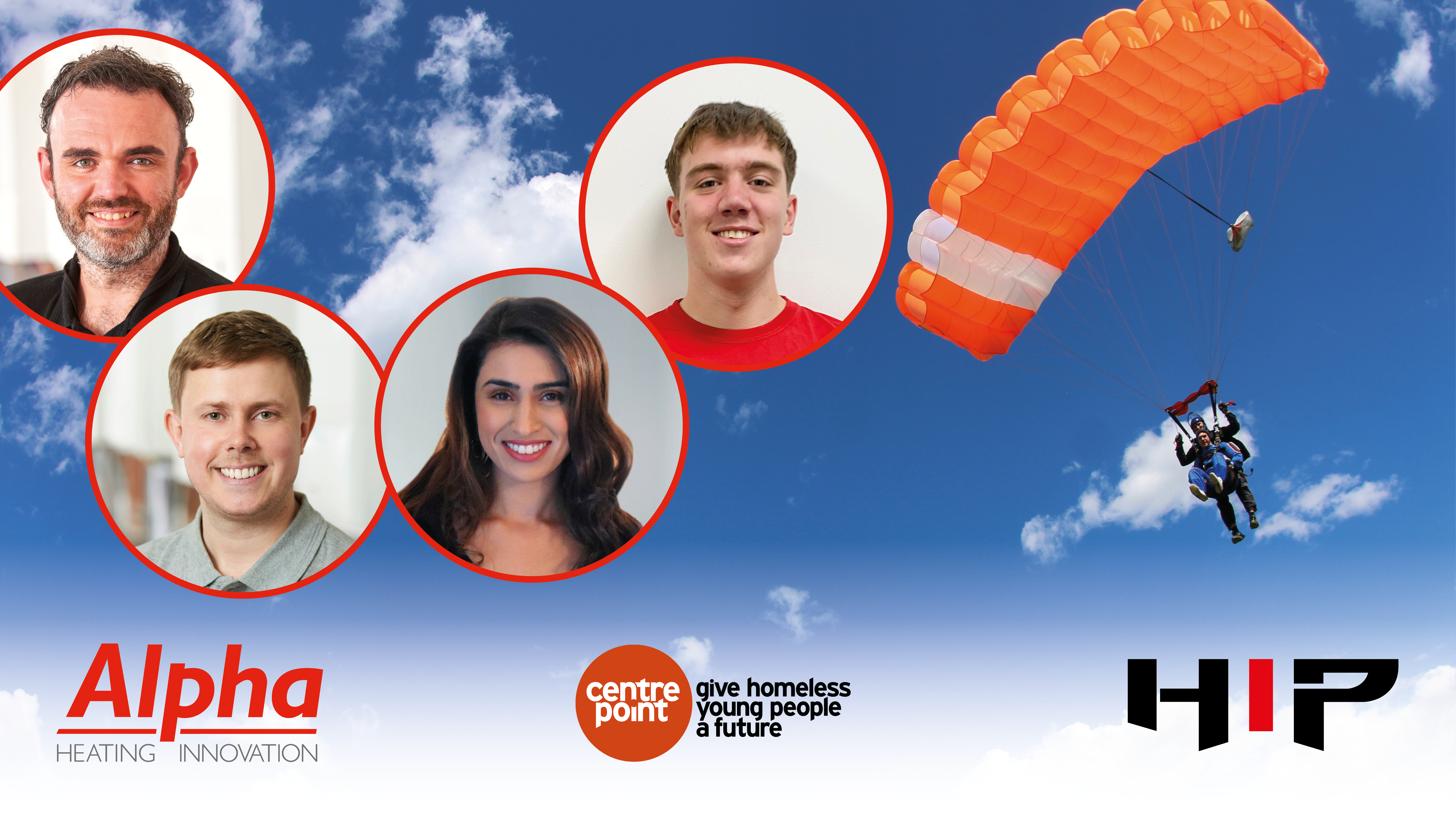 Since the start of 2021, Alpha Heating Innovation has worked hard to support the UK’s leading charity for homeless young people, Centrepoint. Now, in our latest fundraising endeavour, three members of our team will take part in a charity skydive on the 23rd June alongside a representative of HIP Magazine.

Over the past year, we’ve been working towards a £10,000 donation goal for the charity which works to provide young people in need with safe accommodation, health support and life skills. Now, members of our team are ready to take that effort to new heights with a charity skydive on the 23rd June this year. The hair-raising event is also being supported by the team at HIP Magazine and will be publicised through its editorial and social media channels.

Speaking on the upcoming skydive, Kirran commented: “I’m really pleased to be part of this experience with my peers and to have an opportunity to support an incredibly worthwhile cause in Centrepoint. Together, we can work to raise a considerable amount of money for the charity and help to make a big difference. Bring on June 23rd!”

Providing his take on the upcoming event, James commented: “I’m terrified about jumping out of a plane, but that’s nothing compared to what young homeless people have to go through each day. So, if it helps Alpha and Centrepoint to support those less fortunate, then I’m willing to hurtle towards the ground at a few hundred miles per hour.”

“I’m a bit nervous, but proud to support such a fantastic cause,” added Daniel. “In the grand scheme of things, my worries don’t really compare to the challenges young homeless people face. So, if we’re able to help those in need then it will be highly rewarding and a tick off the old bucket list.”

Finally, speaking on his and HIP magazine’s involvement in the event, Tom Beeston added: “It's an honour to be raising money for a charity as important and special as Centrepoint. Youth homelessness is a huge problem in the UK, so it’s great to see HIP Magazine and Alpha Heating Innovation join forces to help raise money towards it.”

We’ve set up a JustGiving page for those who would like to support the team’s efforts, which will go directly to Centrepoint. Away from the skydive, as restrictions continue to lift across the UK, we are hoping to schedule in further Alpha team fundraising events in the near future. Likewise we are continuing to support golfer Jack Senior as plays in the European Tour - so far this year his birdies and eagles have raised over £1,200 for the Centrepoint fundraiser.

If you’d like to donate to the upcoming charity skydive, please visit: www.justgiving.com/fundraising/alpha-heating-innovation-2021-centrepoint-skydive