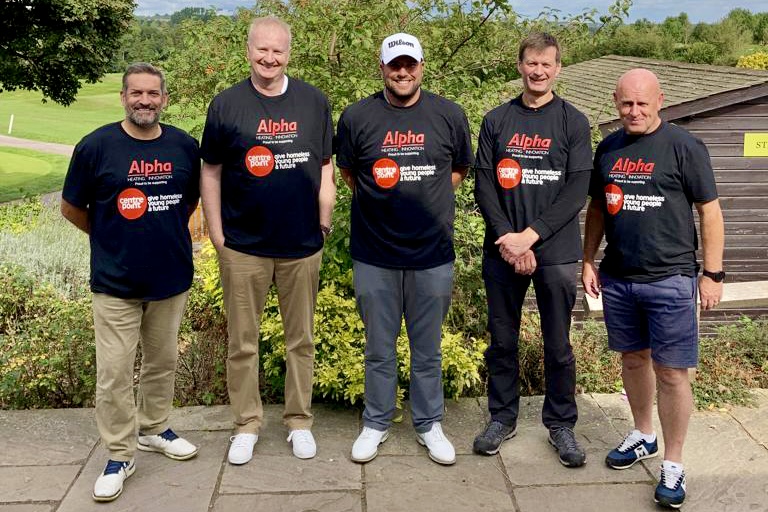 At the start of 2021 Alpha committed to raise £10,000 for the UK’s leading charity for homeless young people, Centrepoint.

Despite the ongoing restrictions in the first few months of the year we are pleased to have remained on target with our total so far currently at just over £7,600.

A number of initiatives have contributed towards this including a team skydiving event back in June, which alone raised an incredible £2,165.

Our partnership with European Tour golfer, Jack Senior, has also proved to be very successful in generating donations for Centrepoint and this was boosted further on Tuesday 21st September at a special charity golf day we hosted with Jack at Cumberwell Park in Bradford-on-Avon.

Alpha customers and followers of our social media channels were invited to put their names forward for a place on the day, which offers a ‘money-can’t-buy’ opportunity to spend time with a pro-golfer and play a few holes. Those who attended were delighted with the experience not least because it’s simply not something anyone could book and arrange for themselves.

Steve farrow, Area Sales Manager at Alpha who helped organise the event and led the day commented: “It’s fantastic to be able to offer a day like this to our customers. Jack and his fiancé Beth, who also caddies for Jack on tour, were very open and willing to answer any questions that were thrown their way as well as share tips and advice on the game.”

Regarding the purpose of the day in raising money for Centrepoint, Steve added: “Our guests were keen to learn more about the charity and proved to be incredibly generous. We really hope that in the future we’ll be able to run more events like this – we definitely consider the day to have been a huge success for all involved.”

Alpha has set up a dedicated JustGiving page to support its efforts, which members of the public can contribute to if they wish: